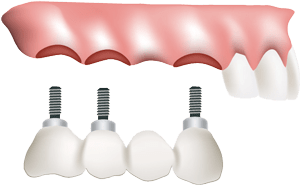 Your mouth is a gateway to infection, inflammation and systemic disease.; ignore it at your own risk. Skipping basic oral hygiene and dental checkups can not only lead to a dingy smile but to serious health problems.

As a child, your parents probably warned you: If you don’t brush, floss and see the dentist- tartar- hard calcium deposits- builds up on the teeth. Plaque, a sticky film of bacteria, is drawn to the tartar, and it builds up like barnacles on a boat. Next come tooth decay, in which the bacteria break down and produce acid, destroying tooth enamel.- And now you have a cavity.

Fortunately, cavities can be filled and the consequences end there. But those same bad habits can also lead to gum disease, which has potentially more lasting damage.

Your blood cells don’t like the bacteria that is not removed by brushing and flossing- so they rush to the gums to fight it, causing swelling. The swollen gums can be the beginning of periodontal disease, in the early stage it is called gingivitis. Gums are puffy, red, and bleed easily.

In the early stages, gingivitis can be reversed with thorough brushing, flossing and a professional cleaning.

Left unchecked, the infection grows, with pockets forming deep under the gums. The bacteria start to eat away at the ligaments that connect the teeth to the bone, and eventually, the bone itself. Gums recede, teeth get loose, the breath can stink.

More dental visits will be required to try to resolve the problem at this stage.

Over the past several years there has been a lot of press coverage about the links between the health of our mouths and connections to cardiovascular disease, stroke, diabetes, inflammation in the body and possible problems during pregnancy.

The nature of this link is not yet fully clear, but we know that inflammation and infection
are dangerous. An infection in our arm or leg would be treated by your doctor. If someone has an infection in their mouth, the closest neighbor is the brain- it should be clear we should be concerned.

Diabetics need to be especially careful of infections- they do not heal as well. Studies have shown that treating gum disease can make diabetes easier to manage.

Hormonal changes can make a pregnant woman’s gums become puffy and inflamed, causing them to trap bacteria. So pregnant women need to be extra vigilant about brushing , flossing and seeing their dentist. Gum disease in pregnant women has been linked to preeclampsia, low birth weights and preterm births. A 2005 study showed that pregnant women who received periodontal cleanings had fewer preterm births than those who didn’t.

It is clear that what goes on in our mouths can affect the rest of our bodies and our health. See your dentist and hygienist for regular checkups. Brush and floss daily!

Ask Us A Question

40% off Dental Implants,
not including abutments or crowns

40% off Extractions,
with purchase of a denture